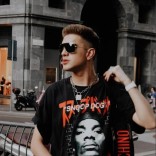 The Modelling Industry During Lockdown – Read All About It Directly From Robert Wilson, Director of FOMO Models

If you haven’t watched Netflix’s Too Hot To Handle yet, you don’t know what you’ve missed. Scandalous sex, champagne for breakfast, and Kori Sampson – a 24-year-old of Plymouth, England – AND YES! HE DOES HAVE AN ACCENT.

Kori entered Netflix’s dating series late in the game, but he certainly made an impression. He is a personal trainer, a model represented by FOMO Models and he even has his own lean lifestyle book – check it out here.

If you’re as interested in getting to know him better as we are, scroll down and read the #AZBibleExclusive interview he gave us:

1. What was it like, the whole “Too Hot To Handle” experience? Did you have any major crush? (besides Lana, of course)

The whole experience was good, I think I’d have taken a lot more from it if I was given the opportunity to get in earlier. It was a bit difficult going in so late and make an impact but I think I managed to do so. Obviously, I fancied Francesca in there because you’d be silly not to, but everyone in there was playing their own game.

2. What was it you were after – hookups, money, or meeting the love of your life?

So I knew I wasn’t going to find the love of my life on a reality show, I don’t think people would really be there for that reason. I’d always been told I’d be good on a reality show by my friends and people around me, so once I got the chance I just jumped at it, to be honest.

3. What was the first thing you’ve done after the retreat was over?

I went straight to Amsterdam with the boys literally a week after for a festival called Music On.

4. What is the modeling job you’re the proudest of?

The recent highlights were signing an important year-long contract with Fashion Nova and a shooting with a guy called Tommy G, which appeared in Heat Magazine. It was really cool to see myself in there!

5. How do you stay in shape? Do you work out often?

So before lockdown I was training weights 6 days a week and also doing Muay Thai 2/3 times a week and the odd run. I actually went to Thailand and did a Muay Thai camp in March which was amazing.

6. How do you feel, being one of the men that every single girl who watched the show wants?

I mean some people would say I definitely didn’t need to make my head any bigger but it is nice yeah, the fact since the show after only getting a bit of airtime over 3 episodes and how much my Instagram’s blown up says a lot. I do really appreciate all the love and support I get though it’s crazy!

7. Do you have any plans for the near future – maybe travelling plans, hoping that everything will get back to normal soon?

Yeah so hopefully I’ll be travelling with work soon, but I’m going to Vegas for Christmas for a family wedding and driving across L.A. for New Year’s which will be sick.

8. When it comes to fashion, what is your favourite designer/brand?

Two brands I love – and wear basically all the time – are Stone Island and Nike. I think Boohoo and Manière de Voir do bits as well.

A grey tracksuit with fresh Forces will always be one of my key outfits. -laughs-

To be fair, I’ve just got my top off most of the time but I’ve worn really sick festival outfits. I once paired neon green visor shades with a trap star top, neon trainers and shorts, which were both from Nike.

If you watched the show I had a pink silk shirt on with black trousers and I was walking around barefoot but I had black Loubs on with it loved that outfit.

10. How many tattoos do you have and what is the last tattoo you’ve got?

So, I’ve lost track of how many sittings I have done, but once I do my back, which is next, it will have cost me 5 figures in total. My last one was small – it’s the letters at the end of my fingers that say take care.

This article was written by Andrei Grigorie, the Founder & Editor-In-Chief here at A-Z Bible. 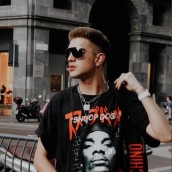 Sustainable Fashion: A Trend And A Must

The Modelling Industry During Lockdown – Read All About It Directly From Robert Wilson, Director of FOMO Models